Anna Knappe
The More I Search, The Less I See

I have never seen Afghanistan.
The more I search for images, the less I see.

I wrote the word ‘Afghanistan’ into Google image search. The first four search results display soldiers marching, shooting and posing with their guns. The soldiers belong to NATO, Taliban or Daesh, and the few local people present in the photographs are wearing blue burqas. The soldiers all look alike. The thirteenth image is the map of the Islamic Republic of Afghanistan, and the fourteenth is its national flag. After these images, another ten images of soldiers follow, one showing fresh blood on the ground, then another map, followed by ten more images of soldiers and helicopters. Around the hundredth image, I see the first non-military image: a schoolroom of girls studying, illustrating the webpage of an American aid organisation.

Searching the image bank Getty Images produces similar results, except that the images of soldiers also include mountainous landscapes in their background. The first image in the list of search results is a photograph of a young brown-eyed woman wearing a scarf covering her face. The image caption reads: “Young Arabian woman in hijab”. Afghanistan is not an Arab country, and Afghan Arabs normally refer to Arab Islamist mujahideen who fought alongside the Afghan mujahideen during the Soviet-Afghan War, not young religious women. Afghan women are again wearing burqas, the visual symbols of Taliban oppression against women in Afghanistan during the Taliban rule. The images of burqas remind me of how Afghan women were victimised to gain the American public’s support before the US invasion of Afghanistan. The idea of “saving Afghan women from their oppressors”—meaning Muslim men—helped popularise the view that the war was for Afghanistan’s own good (Hirschkind & Mahmood 2002).

As the German artist and researcher Hito Steyerl (2007) writes, the domination of remote people has been closely linked to reporting the so-called truth about them, and that photography and military technology have always been linked together. In this case, the burqas represent the so-called truth of the people of Afghanistan, mixing Afghans with Arabs, suggesting Islamic fundamentalism as the root of all problems, and creating a visible sign of an invisible enemy that threatens us (Hirschkind & Mahmood 2002).

The algorithm of Getty image’s search engine also suggests other search words related to the word Afghanistan: Iraq, Kabul, and War. Google suggests the words: map, war, killed, nato, peace, soldiers killed, troops, troops killed, army, taliban, kabul, afghan, afghan war, kandahar afghanistan, police, and military. I have never been in Afghanistan and never seen what the war really looks like. However, I know that there has been an on-going conflict in Afghanistan for almost 40 years, and that its latest episodes, Operation Enduring Freedom and its sequel Operation Freedom’s Sentinel, starting in 2001, are now now entering eighteenth season. To a Western spectator like me, the war in Afghanistan is portrayed with the images of the ones in power: the US military.

For Afghans themselves, the war images have also become part of their image of Afghanistan, but their gaze is different than the western gaze. Amir Jan is an Afghan artist and filmmaker who uses images of Afghanistan in his works. His fascination with the war images of Afghanistan comes from his childhood outside and the disconnection he felt when growing up as Afghan in Iran. He describes the first images he saw from Afghanistan: “When I was a kid, I never saw anything else than war images from Afghanistan. To me, they were Afghanistan. During the civil war, my father used to go to meetings in Tehran to listen to different leaders of the mujahideen, who came to Iran to collect money from the Afghans living there. They always brought videotapes with them and sold them to the audience, and my father bought them and then showed them to the family. These videotapes were my first tangible memory of Afghanistan. I saw tanks and soldiers; I saw them fighting and people getting wounded and killed; and I saw war prisoners being captured and then marching in front of the camera. The idea was that we Afghans who lived in Iran could participate in the war by paying instead of fighting, and the videotapes were proof that the money was well spent. But to me, who had never seen Afghanistan, the war became the only image of Afghanistan.”

Afghanistan 100 is a photographic collage I made together with Amir Jan from the first 100 images of the Google image search for Afghanistan. For Google, the name Afghanistan is associated with the word ‘war ‘and the image search results reflect this. The constant flow of military images associated with the country partake in normalising the conflict as something that simply belongs to Afghanistan: Afghanistan is war and war is Afghanistan. There are no other images of Afghanistan easily available to Western audience, only images of Western warfare. For Afghan viewers, the images available are images of suffering: dismembered bodies, blood and mourning. Reluctantly, they get to see the victims of the warfare, but no matter how much they try to share these images via social media, they still become overshadowed by the constant flow of images depicting the war from the point of view of power. Very little has changed in regard to the images of Afghanistan available online since Amir Jan’s childhood. If the war videotapes were the first image of Afghanistan he saw, the web search results were the second: “I remember the first time I was able to connect to the internet, I went to Yahoo search and searched the word ‘Afghanistan’. I really didn’t know anything about it, apart from the videotapes I saw as a kid, because at least back then, they didn’t teach anything about Afghanistan in schools in Iran. Our schoolbooks had four lines of text about the whole county, listing its religion and some other facts and that’s all. So, I searched for Afghanistan and the only thing I got, after waiting for a long time for the images to load, were images of tanks. I didn’t even know which side of the war they belonged to.” 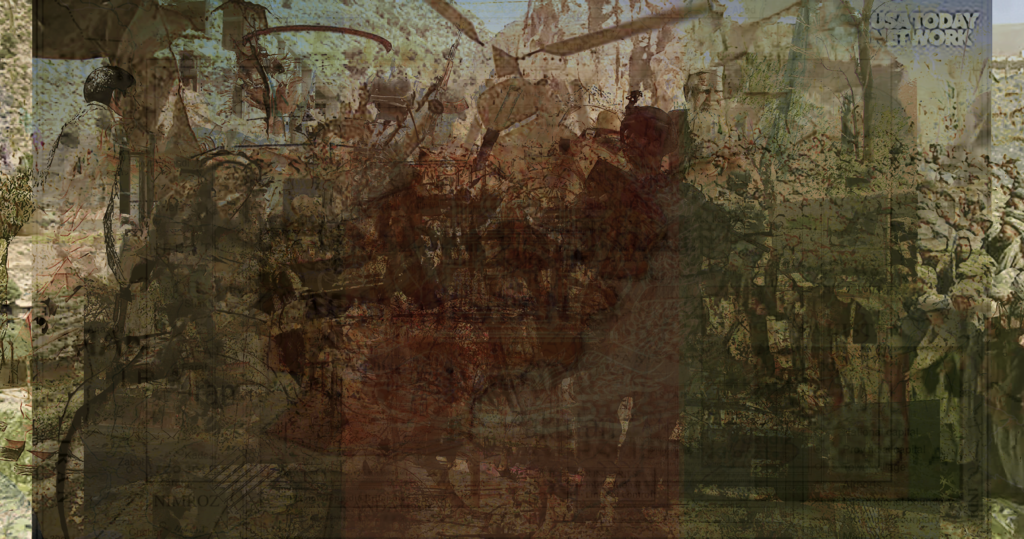 The Land of the Enlightened, a film by the Belgian filmmaker Pieter-Jan De Pue, attempts to utilise the images of US military in Afghanistan and to break the documentary “truth” produced by them through mixing documentary and fiction into what De Pue calls “a hybrid-documentary”. Filming of The Land of the Enlightened took seven years to make, and De Pue spent time in Afghanistan first by being embedded in the US army filming the soldiers, and secondly working on the mountains with a group of Kuchi children—filming a fictional story of the children’s dreams to accompany the documentary footage of the army. In the film, the US soldiers look like children playing a video game. They laugh and joke and shoot their rockets towards the mountains. The camera follows them failing to interact with the locals, who don’t seem to appreciate their colonisers. The film creates a timeless atmosphere in which the war is only a temporary visitor. The soldiers are out of place and the children are the only ones acting like adults, unearthing old Soviet land mines and other leftovers from the previous wars, while waiting for their turn to take over and start cleaning the land after the current invaders. Yet, perhaps unintentionally, the filmmaker’s decision to mix documentary and fiction footage amplifies the typical practice of seeing the military images as representing reality, and the Afghans being portrayed as fictional characters who are not in control of their own land.

It is noticeable that the so-called documentary war images of Afghanistan in the media and image banks, are actually not documentary images of the war, but images of visual symbols of war. They are metonyms for war, showing weapons, tanks, helicopters, and soldiers, but no killing, death, suffering or other consequences of war. Even the photos captured in combat show only one side of the battle, and that side doesn’t get hurt. The images are often staged and posed, showing the actors of the war but not the act or the victims of the war. They are staged because the real images of the war wouldn’t have good quality; they would look messy and wouldn’t illustrate news articles well. Even a Google image search for ‘War in Afghanistan’ returns search results of the same posing NATO soldiers, and only a few images of the Afghan victims. The images are seductive: young, strong, and mostly white soldiers in beautiful scenery, photographed against the sunset with bright colours, shining metal, and camo patterns. They are an advertisement for a fantasy war where there is no death but only heroes, and when there are no victims of the war, we identify with the heroes, for they are who we see as real and their experience as authentic (Steyerl 2007).

In Regarding the Pain of Others, Susan Sontag questions if there is an antidote, a counter-image, to the seductiveness of war. Sontag replies to her own question with an example by the Canadian artist Jeff Wall, a photograph entitled Dead Troops Talk (A Vision After an Ambush of a Red Army Patrol Near Moquor, Afghanistan, Winter 1986), in which a group of injured Red Army soldiers is photographed lying and sitting on a sandy ground after a battle. They are dead but they do not seem to know it themselves. The image is not documentary, it is staged in Wall’s studio, who himself has never been in Afghanistan. According to Sontag, what makes the image so powerful are the soldiers’ disinterest in the viewer. They are not looking at us and they are not interested in our gaze. We have not experienced what they have, and we cannot understand or imagine it (Sontag 2004). Both Jeff Wall’s photograph of soldiers and the illustrative images of warfare in my image search results are constructed. The difference is that the media images offer an easy and polished answer to what war is. They claim that by looking at the representations of war, we could understand the war itself. But the devastating consequences of war is death and destruction, and we never see Western soldiers dead in the images, only Afghans.

In Afghanistan 100, representational images disappear into a blurry mess in which the violence of the original images is present but not comprehensible. The image is almost abstract, yet, it contains a link to its origin but simultaneously hides it. It multiplies the experience of watching masses of individual images that represent the war but tell nothing of the reality of the war. Hito Steyerl (2007) describes a news broadcast from Iraq in 2003, in which a CNN correspondent was using a mobile phone camera to live broadcast the view from an armoured vehicle. Very little was present in the clip due to its low resolution and the general bad quality of the filming, resulting in an abstract footage of blobs of colours moving on the screen, which Steyerl calls a sort of military abstract expressionism. Steyerl asks what this kind of abstract documentarism might tell about documentarism as such, and proposes that perhaps this blurry and unfocused image expresses the truth of the situation much better than any objectivist report could, precisely because it doesn’t represent anything. After going through all the images, I still haven’t seen Afghanistan, but I can finally grasp something, even if it only is my inability to see Afghanistan.

Anna KnappeThe More I Search, The Less I See